Miles O’Keeffe stars as an ex-military specialist in Vietnam trying to recover his son after learning that his wife has died in a concentration camp. The government considers the child their property since the war is over. There are others watching who believe O’Keeffe is in the country to spy on them and they want him dead! He takes a deal from the State Department to gather information on their behalf and if successful he will be allowed to claim his son and take him back to the United States. It won’t be easy though. Svenson plays the angry Russian commander who is hell-bent on destroying the American hero! 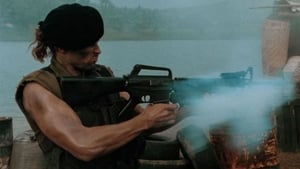