“What are you going to do now, loser?” With these words, the heroic cop confronts the villainous Daisey, a drug- runner who has killed Cubans, Coast Guards and police officers in his efforts to transport “grass and junk” into Florida. Daisy works with Acid, a useless junkie that kills and rapes an Indian woman, accidentally brings the police down on the group multiple times and spends half the movie shooting up, and Dum Dum, a violent pot-smoking Hispanic whose name derives from the bullets in his gun. 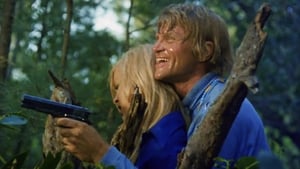