Fictionalized account of Eddie Chapman and his exploits during World War II. Chapman was a successful safe cracker, leader of the gelignite gang known for blowing up safes. He’s eventually captured and imprisoned on Jersey in the Channel Islands. When the Germans overrun the island, he offers to spy for them in return for his release and appropriate payment. He undergoes extensive training and joins a special service unit commanded by Baron Von Grunen. There is always a reasonable doubt as to his loyalty but manages to pass their tests and is parachuted into England where he immediately turns himself into British authorities. After some convincing they fake his mission to blow up the Vickers aircraft plant and he returns to the continent to a hero’s welcome. He continues in this way but it’s never clear just where his loyalties lie. 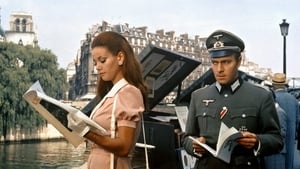